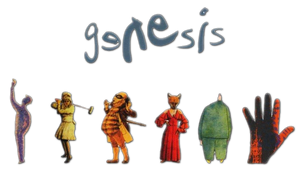 Genesis is an unusual group who transitioned from late-60s British esoteric progressive rock to a dominant pop supergroup of the 1980s. And yet, they sustained progressive sensibilities throughout their five decades together. As individuals, each member also managed to find success. Peter Gabriel’s departure in 1975 after The Lamb Lies Down on Broadway led to Phil Collins replacing him on vocals. Steve Hackett would leave two years later. Mike Rutherford, Tony Banks, and Phil Collins would move forward, incorporating Chester Thompson on drums and Daryl Stuermer on guitar for subsequent tours. With such a strange collection of songs ranging from esoteric to pop, they created live shows which needed to appease a variety of musical tastes. They would also become pioneers in live show production. This led to long medleys of varied songs, creating new Frankenstein songs. This page is dedicated to the Frankenstein songs we love and imitate in our own shows.

Firth Of Fifth/I Know What I Like (In Your Wardrobe)

“Firth of Fifth” and “I Know What I Like (In Your Wardrobe)” are from Genesis’ Selling England by the Pound (1973). This song has been in standard rotation for their subsequent tours well into The Last Domino? (2021). Firth would become a guitar feature, only incorporating the guitar solo on most tours. It would be followed by Wardrobe, even though Wardrobe is before Firth on the studio album. Wardrobe also included a tambourine solo by Collins which incorporated what he described as his own take on the Morris Dance. An extended medley of Easter egg melodies were added in the instrumental section. This medley became the guitar feature for Daryl Stuermer with a song in the middle, and a synth solo at the end (including that Morris Dance along the way). The snippets included in this medley are nods to “Blood on the Rooftops” from Wind and Wuthering (1976) and “Stagnation” from Trespass (1970).

“In the Cage” from The Lamb Lies Down on Broadway (1974) would become a standard starting song for extended varied medleys on every tour, always ending with the ballad “Afterglow” from Wind and Wuthering (1976). As a band, we scoured through these live medleys and argued extensively over which one would be best to recreate. We decided on this version from their Mama tour. The sequence of songs are “In The Cage”, “Cinema Show”, “In That Quiet Earth”, “The Colony of Slippermen”, and “Afterglow”.

Duke's Intro/Turn It On Again

The album Duke was released in 1980. Many of the songs on the album were to stand as one large suite centered around a central character. The band worried about comparisons to earlier large-scale prog works such as “Supper’s Ready” and split up the suite across the entirety of the album. By 1981, they opened their concerts with the first track, entitled “Behind the Lines,” moving to a quick hint at the closing track “Duke’s End,” and then moving into the hit song “Turn It On Again.” This suite would become a standard medley for many of their shows. This was also the opener for their 2007 and 2021 The Last Domino tours.

These songs were from their self-titled 1983 album. Played together, these two tracks are over eleven minutes long. The first track received radio play, while the second part was a melodic instrumental with a slight nod to the first part at the end of the song. The first part tells a story akin to an episode of The Twilight Zone. A man breaks into a home where he encounters ghosts. The man is then forced to listen to their stories for “the rest of his days.” The story seems to end with the idea that he may also be dead with the phrase, “welcome to the home by the sea.”

The distinctive sound of the Simmons electronic drums was used in the second part, eventually added as a backing drum track in live performances. This allowed for the sound of three drum sets being played on tours; Phil Collins on one, Chester Thompson on another, and the electronic drums sequenced behind it all. The form of the second part is quite interesting. It displays a writing process that was probably an extended improvisation which was eventually chopped up in editing. Tony Banks’ synthesizer leads evoke the sounds of the spirits singing in a lyrical melodic fashion. It’s one of the most challenging songs for us to play due to the irregular phrasing and surprising insertions of extra beats in odd places.